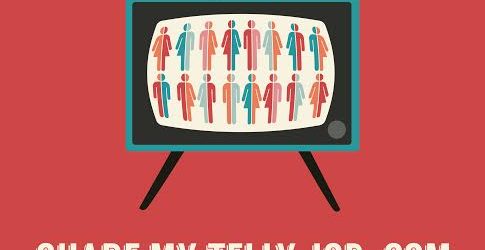 Lou Patel has worked in TV for several years and is a recent first time mother. As she juggled with the conflicting needs of her child and attempts to earn a living she came up with the idea of ‘Share My Telly Job’, which is a kind of dating service for parents looking to job share. Lou explains how she came up with idea and what she hopes to achieve.

I’ve been a mum for exactly 16 months to an amazing little girl called Lola. Before she came along I’d been working hard for ten years to build up my TV career and loved my role as a self-shooting PD/Edit Producer. Literally the moment I became pregnant, my career hit a brick wall. I couldn’t pick up a camera, so no more shooting. I was sick as a dog but felt like I couldn’t tell anyone, I didn’t want to become the weak link on the team. I worked night shifts when I was 6 months pregnant and crawled on my hands and knees to bed when they were over. I didn’t want to rock the boat and ask not to do them because there were plenty of others that would!

Once my daughter arrived and I’d settled in to the motherly routine, I started to think about getting back to work but found it almost impossible to make my old job work. Luckily for me I was able to land a very rare job share working as a Gallery Director. I share with a father of 3 and we work for 6 months of the year, part-time and it works brilliantly. For the other 6 months I’ve been unable to find anything regular. It’s the childcare issue to begin with; committing to £400 a week childcare without a regular job is, well, impossible. But I can’t go for jobs until Lola is settled in childcare, so there is the big catch 22. Then, how do I get home in time to collect her? My husband’s job isn’t flexible so it would be down to me to collect her from nursery if there was a high temperature or a fall.

After speaking to countless mums about the pressure this creates I just couldn’t put myself in this position – I also would quite like to put my daughter to bed, at least a few times a week. So the easiest option, sadly, is to not apply for the jobs. I’m sure this in the internal dialogue all TV mums go through, I don’t have to expand I’m sure! I think the biggest frustration is that I miss the job I love to do and I don’t want to go back, firing at only 70%. Being a freelancer has huge benefits in this world. Being able to pick and choose roles, taking breaks from work when needed, being able to nip off to Thailand in January when everyone else is back in the office. But, now, when I need help the most, I have no maternity pay, no part-time work options, no real loyalty with employers who’ll help work around my family life and get me back in to work.

This is when freelancing breaks down. I’ve moved around companies for ten years and although I’ve made some terrific friends nobody really has any obligation to get me back to work after maternity leave. I understand that as a mum I may not be able to stay in the edit until midnight, pop on a plane to Scotland for a recce, or be flexible with the hours I work. But, when I’m there, I’ll work my socks off to make sure I get the job done. When I’ve put my daughter to bed I’ll happily carry on (from home) if I need to. I won’t shy away from work. If anything, I’ll work harder and I’ll show my employers that I’m as good as anyone else in the office, regardless of a little girl at home who needs to see me from time to time.

I did commit to a full time job, then yes, I probably would fall down in places. I’d be permanently frazzled trying to manage the balance, probably won’t be able to hang on until 6pm when the commissioner is due in or stay until 10pm to get the changes done! But, give me 3 days and there will be no issue – for those 3 days I can put everything in place, I can confirm the childcare and I’ll even be OK if Lola goes bed without seeing me, I have another 4 days where she will. I’ll be productive, I’ll be sharp and I’ll prove I can get it done. When I’ve spoken to anyone who’s been lucky enough to land a job share I’ve never heard anything other than how great it worked out. It always does! Unfortunately, once that golden contract has finished freelancers find it really difficult to find another and usually give up the fruitless task of trying to ‘convince’ employers to try their job share again.

This is where the idea for Share My Telly Job came from. There are so many freelancers I know who I could share a job with. We would handover seamlessly because we have the same experience; we’ve even worked together before. We would work the week between us so one of us would always be there. Given the chance we would make it work, because that’s what we are used to doing in TV. It works on my current job and I don’t see why this can’t be replicated across the industry. It’s success ultimately relies on type of job/programme and the strength of the relationship between the job sharers. I think we all just need the chance to prove that we can make it work.

Although the main aim is to help working parents back in to TV, the job-sharing concept can apply to anyone and everyone who may not be able to commit to full time hours at that particular time of their lives. It really doesn’t have to be an issue for employers, I believe that once Share My Telly Job is established and the best freelancing pairs are matched, employers shouldn’t really feel any difference. Both freelancers will attend the interview, references will be provided and the pair will already have a relationship. The week will have been worked out between them and they, more than anyone, will want the job share to work.

When I launched the group, Share My Telly Job on Facebook, I would have been happy with a couple of hundred members ‘liking’ the concept. Within 48 hours, 1800 had joined the group, and the support has been incredible. You can see from the comments within the group’s pages why gender inequality in TV isn’t being fixed. There are countless articles written, reports and statistics published that illustrate the problem, but what is actually being done to counteract the problem? Along with the support there has been a certain amount of resistance from employers too. This is to be expected. Any feedback at this stage is welcomed and it all helps to create a better understanding as to why a simple solution has been so difficult to implement.

It doesn’t make sense why freelancers with superb CVs and years of hard work and success behind them can’t go back to work. My hopes are that employers can change their perception of TV parents and part-time workers so they are not seen as a drain on resources, but in fact a valuable asset. At the moment Share My Telly Job is a concept and to make it a reality we need employers to be brave enough to give it a try and lend a hand to thousands of talented freelancers who are trying to keep hold of a career they love.

Our website will be up and running by the end of April. It’s a simple site, which will encourage the community of TV parents and part timers to put forward their availability and preferred job roles. It will take some time to grow the database and get the matching process underway but when we get it right we really hope that the companies get on board and set aside contracts that work well with job sharers. The main site will follow in the next couple of months once we get the service off the ground. The idea is very similar to a dating site – once you join, you can chat to other members looking for similar roles, organise a meet-up and bash out a working week that suits the pair of you. You’ll be able to advertise yourself as an established ‘job-share’ and search for jobs that have been allocated to Share My Telly Job.

With almost 2000 people supporting the concept of so far, it’s clear there is a demand for a more adaptable way of working in our industry. We feel that job shares should be common working practice, not just a lucky find. By signing up to Share My Telly Job and showing your support, you will be helping us make the right noise to convince employers to support a more flexible way of working.

Can job sharing work in TV? Lou Patel has an idea…