The Future of Flexible Working in TV 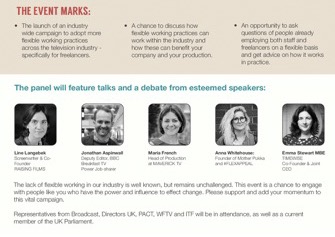 In January this year, I’d decided to leave telly. As we all do at times I just didn’t think I had enough gas in my tank to make it work especially with an extra child thrown in the mix. I honestly didn’t know where to start with trying to get back in to the edit so I thought I’d try something new!

Just then I got a phone call from a great company asking if we’d help them find the other half of a job share as one of their freelancers had asked to work part-time and they wanted to make that work.

It was a great call to receive. We got going with finding people right for the position and through that, the conversation started once again about flexible working in telly it kick-started my own muted ambitions to get back into work.  It was clear that if one employer was so focused on making it work then so many others must be on the brink of it too…

After lots of email chats with freelancers looking for flexibility, we decided to arrange an informal meet up at the Southbank so we could all say hello, swap CV’s and talk about how on earth we were going make working part-time and actual ‘thing’!

That day, around 12 ladies met up – many with babies and toddlers in tow – which was lovely! …We didn’t get around to swapping many CV’s, but we did have a very open and frank chat about our careers, the industry and its lack of flexibility for freelancers and how we felt things need to change.

Everyone who was there that day had an impressive CV – they were all very talented and very experienced women who really wanted to work but couldn’t always quite get the right fit for them.

Many of us had stories of how we’d had jobs lined up only to have the offer withdrawn when the idea of a job share or flexible hours were mentioned… How would job sharing or flexible work ever become the norm if the people giving out the jobs won’t even consider it? It seemed clear that if the people hiring aren’t open to giving it a go, then things are never going to change!

There are loads of really positive examples of how job sharing and flexible work in the industry can and does work – but sadly these opportunities are still very rare.

We decided that the way to get the conversation going, would be to launch a campaign to promote flexible work for TV freelancers  (#tellyflex) and put together an event for the people who have the power to actually facilitate change.

We realised that event had to be about inspiring the “decision makers” to employ more freelancers on a flexible basis. Job sharing as a solution works for everyone. Freelancers can manage their work/life balance, employers fill their full time roles and and army of experienced talent can continue to work in an industry they love but do it in a way that works for them.

As always when we talk about job sharing, we all agreed that given the opportunity, we would do whatever it takes to make it work. Job sharers come with little risk, just two eager minds determined to show employers that this is a very viable solution.

So with that, the idea for the event began to take shape…

Over the past 4 weeks, we’ve worked flat out to get together a really exciting panel and organise an event which will hopefully dispel all of the myths surrounding flexible work.  We’ve been in touch with and had meetings with representatives from Women in Film and TV, Raising Films, PACT, BECTU, Directors UK, Timewise, The Indie Training Fund ….to name just a few!

We’ve spoken to the Chair of the Women’s and Equalities Commission, Creative Industries Federation, London School of Economics, Broadcast and contacts within the BBC, Sky, Viacom, ITV, C4 and Channel 5. The calls are still being made but we’ve covered a lot of ground!

Whilst we acknowledge that there are many companies doing their bit through back to work schemes and flexible working groups, many of these don’t apply to freelancers.

Almost 45% if the TV work force are employed on a freelance basis and what we want is for employers to include us in their schemes and employment policies and encourage more support for flexible working requests from freelancers.

Its snowballed into a bit of a beast, but what’s been really amazing is just how encouraging and supportive everyone we’ve been in touch with has been. Hopefully the words of encouragement will translate into a real momentum for change.

The event is a panel debate and discussion called ‘The Future of Flexible Working in TV’ and we’ll be using the hashtag #tellyflex to help launch the campaign across social media.

This first event is aimed at the people doing the hiring – because if they won’t get on board with it all, then however much we all want it, nothing’s going to change.

We’re about to press send on the invites – that’s quite nerve wracking!

There will then be another event (plans in the pipeline) to get together the job sharers… hopefully a sort of job sharing speed dating type event which we hope we can run once a month.

In other news – last week, I was offered a job share! I’ll be working with a friend I’ve known for many years on a new entertainment format. The Exec was incredible – she trusts us implicitly to deliver what she needs. We will because we want to prove more than anything that this way of working works – for everyone!