How we made flexible working ‘work’ for us….

How did the job-share come 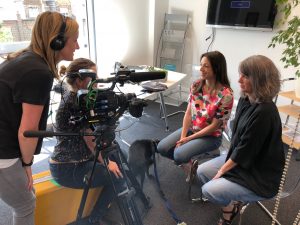 Karen: We first started job sharing on Snow Sex and Suspicious Parents.  I had worked with Amy a long time ago and had got on really well together!  When she said she was pregnant, my daughter was about 3 at a time.  I basically invited her for coffee and said, “When your baby comes out, do you want to job share with me?”

Amy:  It was quite early days of casting producers, so we didn’t know that many others!  But we had both done a series of Sun, Sex or Snow , Sex and Suspicious Parents and we were in a really nice position in that we were able to say to them, “Okay we would love to come back, but how about a job share?” and they were brilliant about it.

Karen:  Jo Scarratt-Jones gave us our first break and let us go with it.  We had to prove that we could do it because no-one was sure that as Casting Producers you could job share.

Why did you want to job-share?

Amy: At the time job-sharing was quite unheard of.  I didn’t know anyone else that job shared.  When I stopped working, I sort of had to be okay with the fact that maybe I wouldn’t be able to get back into work, maybe it wouldn’t work, maybe I couldn’t find anything flexible.

The first time we job shared, my son was 10 months old and still wasn’t sleeping and actually I felt a little nervous about coming back into work.  By job-sharing, I felt much more confident knowing someone had my back.  I had someone else to bounce things off and say “am I going crazy?’ “is this what we usually do?”  I think that was a really nice added bonus.

Did you find any opposition to your job-share?

Karen: There have been people who aren’t as favourable to the idea and so we have had to work extra hard.

Amy: You have to reassure the team that you have it all covered, that we are communicating constantly with handovers.

Karen:  The best example we have when people say ‘job-sharing won’t work’ on a contract is that “Snow, Sex” was the hardest cast to do as a job share because the turnover is phenomenal.  So being able to do that as a job share proves it can work in most genres of television.

How do you structure your job-share?

Amy: Every series that we have done together has been structured totally differently.  We have done a series where Karen did the first of the contract because I was on maternity leave and then I did the second half of the contract.

We have always crossed on a couple of days at least.  Certainly on Secret Life there were always days where we would be able to catch up and there were never great periods of time where you weren’t in and you missed stuff.

Karen: We did extreme handovers on the job every night.  We would CC each other on every email and every night we would debrief to the other with an extensive email.

Why do you make a god job-share partnership?

Karen:  Our old exec nicknamed us Positron (Amy) and Negatron (Karen).  So Amy always sees the good and the positivity in everything and I’m saying “It will never work”.

I guess job sharing is like a marriage, you have to have personalities that work together but are very different. Then you do bring different things to the table.

Amy: For example, we made sure that any important meetings, any casting meetings, trips to Channel 4 to get sign off for our cast, we always scheduled those for days when we would both be there.  We were always trying to make sure that we were both at those important things.

Karen: I think that’s the most important thing, neither of us are ‘glory boys’ going “Look at me, I’m amazing”.  It’s always very shared.  You need that connection because TV can encourage a lot of competitiveness, but you have to work with someone who is working with you and that’s what we have.  We work together.

What are the benefits of a job-share for an employer?

Karen: Our Boss Teresa says she got “Two for the price of one” which is a no-brainer. There has to be give and take if you want to keep talented, intelligent, smart people in the business, both men and women.

Amy:  If we aren’t willing to be flexible with very experienced women or men, then actually the other option, is to take someone less experienced and that will bring problems of its own.  So you could have two very experienced people instead.   You’re getting so much more than you would get with just one person and no-one is burning out

What are the benefits of a job-share for you two?

Karen: Job sharing is incredibly important because what it gives you is time with your family, and then the ability to work really long hours on the days when you are not with your family, which is what you do in television – it is not 9-5.  When you job share you can find that balance.  Without job sharing it is almost impossible, I think, to do it all.

Amy: With job-sharing, the days off that I do have are mine.  Someone else is handling it, you are not bothered on those days that you are off.  When you are not job sharing, you have to be available on your days off with your children and you’re trying to do a thousand things at once and take work calls – we’ve all had those days.

Is job-sharing just for Mums?

Karen: I’ve actually met lots of Dads I am working with, and they hear about this job share and feel it’s not something that is open to them, and they desperately want to spend time with their kids too. I don’t see why it has to be this great secret that you can share a job.

How can employers make job-sharing an easier and more ‘normal’ option?

Amy:  The problem is, (as a job-sharer) it’s all in your court.  It’s your responsibility.  You have to go to an employer who maybe doesn’t even know you, they’ve called you out of the blue and gone “Amy are you available?” and it’s up to you to say to them “Well, erm, actually, I don’t know how you would feel about this, maybe I can job share on it?”  You have to put it to them; nothing is coming from the employers.  You don’t see them advertise, well you do through Share My Telly Job, but no-one calls you and says, “Hey we’ve got a great idea for a job-share.  It is totally down to you to put it to them and that is quite nerve-wrackin