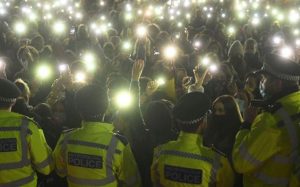 Two events this past weekend have been about women: the vigils that were held across the country to protest the murder of Sarah Everard, and Mother’s Day. One a howl of pain that STILL we cannot be safe from male violence, the other a benign marking of the sanctity of motherhood.

First, the vigils. Sarah Everard’s murder (we should not call it her death) was not an unusual event: more than two women a week are murdered by men in the UK alone. If the press reported every one of these murders with the same attention they did Everard’s, we would understand the horrific banality of how she was killed. Men kill women with a regularity that fails to warrant attention because it is so frequent (please see: https://www.femicidecensus.org). 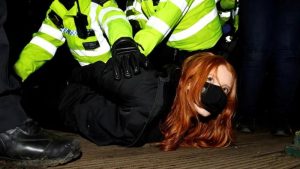 These killings are banal, just like harassment and silencing of women is so commonplace that it barely registers. Ask any woman,and she will have been harassed. It happens in the street, in cafes, in cars, in parks, in any space where there are men and women. Any space at all – even vigils for murdered women. It happens online all the time, over and over again. Figures like Meghan Markle, Diane Abbott and Mary Beard are the extreme end of the spectrum, where they receive racialised, ageist threats of gendered violence on a minute-by-minute basis. Elsewhere, women are shut down for all kind of reasons: too pretty to receive sympathy, too ugly, too white, too black, too prudish, too slutty, too relaxed, too uptight, too clever, too stupid, too old, too young, too CIS-gender, too trans, too (my personal favourite) toxic, too every fucking possible thing anyone might be. Women are wrong in every possible way, these posts say. Women should go away, be silenced, be shut up, be killed off. 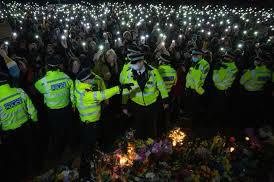 Mother’s Day, meanwhile, tells us we have got one thing right: we managed to reproduce. Now, I like Mother’s Day because I like the cards my kids make. But it’s a little reductive – yes, babies are great but a card once a year doesn’t really understand the work that mothers do all the time. How about then, we consider making Mother’s Day about teaching men – ALL MEN – about how they harass women. How they talk over them, deny them space, decide they are wrong not because of what they did – and I reserve the right to be wrong, thanks very much – but because of who they are. Sexism is endemic and male violence is endemic: it is there in every dictatorial, declarative stance on what women “should” be. The value judgements on who we are. Just like those who say Sarah Everard “should” have been more careful. Well, no more “should” – no more declaring what women “should” be. Because “should” is on a spectrum that allowed Sarah Everard’s murderer to take her life, and all the men who kill women on the tragically regular basis that they do. When men silence women, talk over them, decide they are wrong, refuse to engage, they are complicit. Until men understand their complicity in the “should”, and understand how they sit on the same spectrum as the men who kill women, then the horrific banality of Sarah Everard’s murder will not change.