And Then There Were 4… 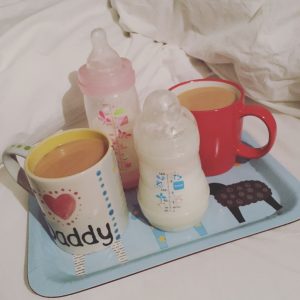 ..the mist is lifting now we’re 10 weeks in to being a family in ownership of 2 brilliant children.

It’s been a (very) steep learning curve but I’m finally feeling beginning to feel like I’m getting the hang of doing most tasks with one hand and working out the psychological minefield that has been introducing a baby to a toddler!

I’ve done some pretty tough shoots in my time which have included hospitalised contributors and sleepless weeks but these first 10 weeks of multiple motherhood have eclipsed all of these endurance jobs! I feel like I could self-shoot and entire series with one hand on 3 hours sleep, probably coming in under budget and exceeding every commissioners exceptions at the first viewing!

Obviously that’s never going to happen as I don’t think I’ll ever be able to part from the mini ones long enough to shoot even ‘part one’ of a 30 minute episode so my future lies firmly in the edit – or the office…better still, the gallery..for now…

My mind is now engage 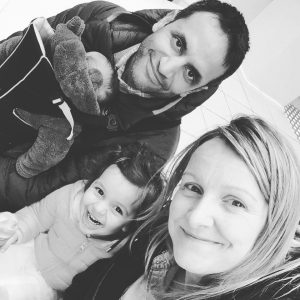 d with getting back to work. In a way, having 2 children makes the route in a lot easier. I know I can’t commit to a 24 hour shift rota with 2 so I’m focusing on a 9-5 (ish) day..for 3 days. Unlike before I’ll now consider anything that is offered, I know I don’t have the luxury of picking and choosing my jobs but will need to choose the best fit but I’m definitely excited at the prospect of returning to work.

My boy is only 10 weeks old and although it does seem quite early to be thinking about returning to work I feel that it will take all of my (limited) spare time to contact employers, meet them and wait for the right role to come up so I think now is a good time to start the back to work process.

So..I’m on the hunt for a job sharer again – an Edit Producer ideally..to start around October time – if it’s not a shared role then I’ll be looking for a part-time EP role. Then I just have to convinced that employer that I haven’t forgotten how to do my job..then I have to do it! Easy..

The dream is to continue Multi Camera Directing in some capacity – I think this is the tougher road to go down but I shall be driving with hope in that direction too!

The website has been somewhat neglected in the later stages of pregnancy up until now but I’m delighted and excited to see that there we have well over 100 members on the site. I’ve had messages from friends of friends over the past few months telling me that they’ve successfully found jobs and job sharers through the website who’ve passed on their thanks – cockle warming news.

I’ll be tinkering with the site and getting the blog up and running but for now it’s time to embark on The Job Sharing Experiment MARK II. If you know of any long term, part-time, multi camera roles which offer training and preferably a creche – I’m your girl! (If only)..

A big thank you to everyone who has joined the site and supported the idea..it’s been a year since I set this up – where did that go?!