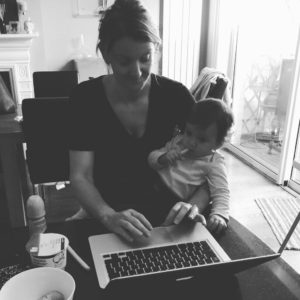 Freelance PD, EP and Gallery Director and Founder of Share My Telly Job.

Lou travelled for years as a freelance PD, until two children came along – which kind of limited her commute to within the M25!

For the first three years after her first child was born, Lou worked as a multi-camera Director on Big Brother. She job-shared this position for 5 series and realised that this kind of working arrangement was the perfect way to maintain a career whilst also raising a young family. It soon became obvious though, that opportunities to job-share were very few and far between.

In 2015, Lou launched Share My Telly Job to address what she felt (and still feels) is a huge issue within the industry. For a lot of people, full-time, full-on freelance TV jobs are almost impossible to maintain well when lives outside of work become more complicated. The result is that hundreds of freelancers (mostly women) feel forced to walk away from a career they really love every year.

Since 2017 Lou has worked in job-shared edit producer and gallery directing roles on a variety of shows including entertainment, reality, fact-ent and a commercial documentary film. She’s tested the concept of job-sharing out on both new and established formats and with a number of different job-share partners.

Lou is a Mancunian living in London with her two young children and very patient husband.

Michelle joined Share My Telly Job following a 17 year career as a Producer and Director in Factual and Entertainment Television in the UK and the US.  Highlights included House Hunters International for Leopard USA, 100 Year Old Driving School for RDF and Deal or No Deal for Endemol.

Michelle then went on to work as the High-End TV Manager for ScreenSkills, where she became involved with the world of TV drama and ran a number of successful training programmes, including a Return to Work scheme with Film London.

Michelle now works solely for Share My Telly Job and is passionate about promoting job-sharing as the best way of keeping talented, experienced and diverse freelancers in the industry.

She lives in London with her husband, her two feral girls and a very well behaved dog.

Rowan is a Television studies researcher, lecturer in film and TV, ex-TV person.

Rowan started in TV in Sydney as a Location Assistant for Australia’s Ground Force way back in the early noughties. She landed at BBC Arts a few years later and worked on arts docs and news at the beeb and indies until she had her first child in 2011. After that the maternal wall loomed, and she left TV for a PhD in 2014.

She got to know Share My Telly Job through her research into care practices in television production. She joined SMTJ in 2020 as part of The Time Project collaboration and now works with us as our academic consultant, as well as teaching at the University of Huddersfield.

She lives in the wilds of Yorkshire with her two children, husband, a grumpy cat and never-obedient sausage dog.

Nat is a freelance Senior / Series Producer / Edit Producer and first became involved with Share My Telly Job in 2017 following the birth of her daughter.

Since 2017, Nat has job-shared with a number of job-share partners, some of whom she knew very well and some of whom were total strangers… she has job-shared on pilots and first series, as well as on established formats.  She has also hired other job-sharers on her teams. She is a firm believer that job-sharing brings enormous benefits for both the employer and the freelancer and hopes more companies are beginning to realise that.

In 2020 Nat was elected to be the first ever Bectu representative specifically for job-sharing and flexible working – a voluntary role within the Unscripted TV Branch of the union.

As well as regularly job-sharing TV roles,  Nat also works as an editorial consultant within the gaming industry – an industry she believes TV could learn a lot from in terms of attitudes towards flexible working.

Nat is a northerner, exiled in East London, where she lives with her husband and daughter.

As a non-profit organisation, it is vital to us to have a strong organisational structure.

Our board members focus on SMTJ’s mission, strategy, and goals and meet periodically to discuss what direction Share My Telly Job should head in. Our board share our passion and concern for television and film’s freelance work-force and are perfectly placed to advise us as we steer our company to best serve our community.

Anna is a campaigner, journalist, presenter, wife and mother.   Anna  created the campaign for flexible working hours using #FlexAppeal which has seen her give a TEDx talk, lead lycra-clad flash mobs, present to major industry leaders, speak at the Welsh Assembly and ​work alongside MPs in Westminster to create a Flexible Working Bill as part of her campaign for flexible working for all.

“This is not just for mothers or for fathers, it’s for people suffering from anxiety, people living with disability, caring responsibilities – people just wanting to live.”

Anna was on the panel at the very first Share My Telly Job event back in May 2018 and has supported our work ever since.  As a freelancer herself, she understands the specific pressures that can come with trying to juggle a freelance career alongside other responsibilities and believes passionately that new ways of working are possible in creative industries.

Sohail Shah – Founder and MD of King of Sunshine Productions

With more than 20 years’ experience in the industry, Sohail specialises in factual entertainment and has credits on all UK terrestrial channels and numerous digital channels worldwide. As well as working extensively in commissioning & production, he has also been a successful Head of Development, heading up development departments for BBC Studios, ITV Studios, STV Productions and October Films amongst others.

In 2019 he launched his own production company – King of Sunshine Productions – back in his hometown of Salford, a decision due in part to his own desire for greater workplace flexibility. Sohail is passionate about improving diversity and access to opportunity in television and a strong advocate that implementing flexible working practices can be a crucial way to achieve this.

Sohail is a Non-Exec Director for Elstree Film and TV Studios and also part of the Advisory Board for the Edinburgh Film and Television Festival, as well as a committee member for the ‘Ones To Watch’ and ‘The Network’ Talent Schemes.

Mandy is the former Director of People at United Learning and an experienced board Director. She was listed in HR Magazine’s Top 10 Most Influential in HR 2018 and shortlisted for HR Director of the Year 2018. Mandy’s team won CIPD HR Team of the Year (Public/Charity sector) 2016.

She is a graduate in Law, a fellow of the CIPD and is a trained executive coach (ILM7).

Mandy is particularly interested in flexible working as a way of retaining talent and has been recently looking at how flex options such as job sharing can work in an Education setting.  She is bringing this learning to advise us on how job-sharing can work in television.

Lindsay is a multi award-winning marketer, skilled in brand, digital, communications and strategy. She has a breadth of experience including commercial, agency, government and not-for-profit roles.  Most recently, she advised digital start ups on their marketing strategies and crowdfunding campaigns before joining the Film and TV Charity as Director of Marketing and Fundraising. Her mission there is to develop their first marketing and fundraising team, build a brand which is as creative as the people the charity exists to serve and create a sustainable fundraising model.

Before working in Talent, Rose worked her way up from runner to assistant producer in reality, entertainment and fact/ent programming. She worked in both Manchester and London, as well as on location all across Europe.

In 2016, Rose made the move into Talent Management. She currently recruits production talent for broadcast at Studio Lambert and is primarily based out of their Manchester offices.

Rose works flexibly, doing a four day week and is able to work from home when needed. She is a passionate advocate for job-sharing and flexible work and has recruited a number of successful job-share pairs.

Our champions bring us a wealth of industry experience and knowledge gained across a range of sectors.

We share a common interest to inspire a more sustainable and innovative television and film industry and our champions help us to deliver on our mission to enable freelancers to find the flexibility they need in the industry they love.

Freelance Producer and Founder of Disabled People in TV

Founder and MD of Knickerbockerglory TV

Head of Diversity for ITV Commissioning

Founder and MD of Sara Putt Associates, Trustee and Board Member for BAFTA

Group Head of Development and Learning at The Mill and Founder of ACCESS:VFX