Why are we still talking about equal pay?

Today is Equal Pay Day. It is the day as the Fawcett Society calculates [https://www.fawcettsociety.org.uk/news/the-fawcett-society-announces-date-of-equal-pay-day-2020], that women stop earning relative to men. Which means it’s the day when women start working for free compared to men doing the same job, for the rest of the year.

When the Equal Pay Act came in in 1970, [https://www.legislation.gov.uk/ukpga/1970/41/enacted] its very first clause stated ‘for men and women employed on like work the terms and conditions of one sex are not in any respect less favourable than those of the other’. And yet, here we are, 50 years later, with women working the last weeks of the year for free.

Of course, we’re still talking about equal pay because women, still, are not paid equally. The reasons for this are myriad, culturally embedded, enmeshed with the ways in which most women feel unable to ask – demand – to be paid equally. Women, yet, are not able to do that. However, a primary reason is that onus remains on individual women to fix the problem for themselves. Despite the Equal Pay Act and despite Gender Pay Gap reporting, the ways in which pay negotiation is placed upon the individual is clearly punitive.

Take two recent high-profile cases at the BBC: Samira Ahmed and Carrie Gracie. In June 2018, China Editor Gracie won back pay, awarded to achieve parity with male colleagues, of £361,000 (which she donated to the Equal Pay Advice Service and the Fawcett Society)  [https://www.theguardian.com/global/2019/sep/02/carrie-gracie-i-learned-about-equal-pay-the-hard-way], while in January 2020 Ahmed successfully showed she had been underpaid by £700,000 [https://www.bbc.co.uk/news/entertainment-arts-50599080]. Gracie accused the BBC of having a “secretive” culture around pay [link https://www.bbc.co.uk/news/uk-42598775], which is clearly demonstrated – had the BBC had transparent practices, the women would not have needed to seek such recompense thorough the tribunal process. 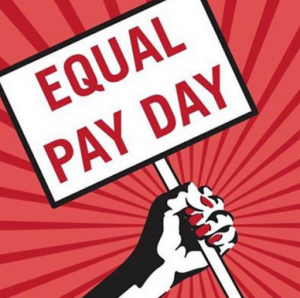 Yet just last week, the Equality and Human Rights Commission (EHRC) found no legal wrongdoing by the BBC [https://www.bbc.co.uk/news/entertainment-arts-54901308]. To be secret, to obscure to the detriment of a particular group, is not, it seems, illegal. Yet the moral case is clear: women should not be paid less than men when they do the same job. Ditto any differentiation, whether by ethnicity, sexuality, (dis)ability or class. It is therefore up to organisations to tackle this on a moral basis, unenforced by the law. Maybe that’s why we’re still talking about equal pay, because institutions remain morally uncompelled to enforce pay parity. (To be fair to the BBC, the corporation has given pay rises to 700 women in the wake of Gender Pay Gap reporting [https://www.theguardian.com/media/2020/sep/14/bbc-has-settled-at-least-700-female-employees-equal-pay-claims], but out of over 22,000 staff does that mean everyone is now paid fairly? That remains unclear.)

This is exactly what we hear from people who contact SMTJ – that institutions are unreliable and pay transparency is lacking. Women have to fight to be heard, and many do not have the agency or the power for that fight. This does not apply solely to television work of course. But it is arguable that the peculiarities of television, with its hierarchies, gendered roles and competitive nature, all work to exacerbate the secrecy. Women and other marginalised groups are made to feel “lucky” to be in TV, and they are rightly fearful of “making a fuss”. Without the power that visibility brings, the culture dictates regular workers remain ignored (while both Gracie and Ahmed have both spoken of the toll the fight took on them). The TV industry is seen as progressive, and yet it very much is not. This shouldn’t just niggle at you – it should make you furious.

What, then, to do? Increased institutional transparency aside, there also needs to be less reticence about what we are paid. Share your rate and get men to share theirs too. When you know people are being paid differently for the same job, make it known elsewhere! When you know you are being paid more than someone, ask for their rate to be raised! Talk to each other, understand what is happening collectively. Work together in defence of each other.

Equal pay should be a given, and fifty years on it is not. Inequality is a long, slow death, where those penalised by it will never quite catch up. Without equality, diversity cannot happen, and we can never be inclusive when one group remains advantaged. It is undermining and unsettling to have to navigate marginalised states alone, yet it becomes habitual as we go further on in our careers. Equal Pay must be tackled together, it must be demanded together. Then, finally, we can stop talking about Equal Pay because it will be irrelevant.